Yes! I did it! I’m now a member of the Marathon Finishers Club 😍 if such a thing exists. Anyways, I’m having a mixed bag of emotions. On the one hand, this feels pretty much like getting past the age of 18 😃 if you know what I mean. On the other, I’m reminding myself that running 42km and finishing a marathon is not a small feat, and I’m pumping some pride into my bloodstream to elevate the level of excitement 😃. With all that, it happened. I finished my first marathon in under 5 hours, to be exact, 4 hours and 47 minutes. I’m thrilled with the result! 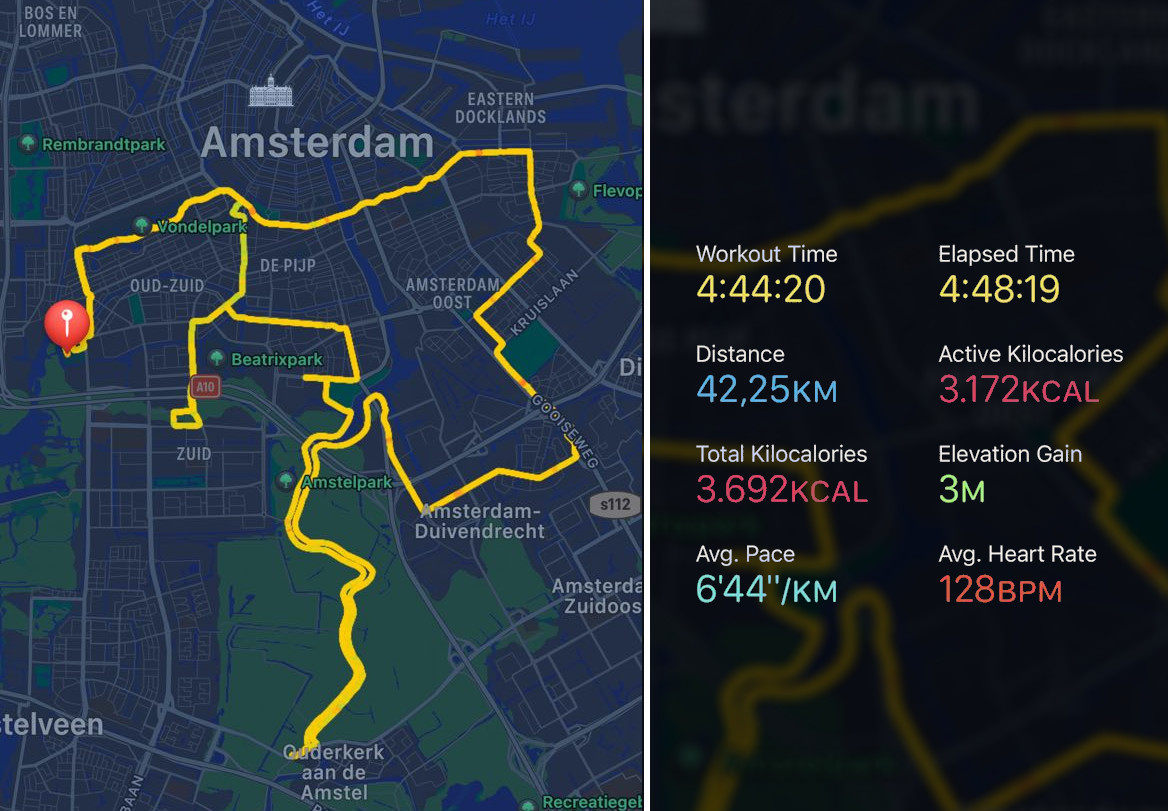 Let me take you through the 42km journey a little bit. The marathon was in Amsterdam, and it started at 9 AM. I left the hotel and went around 45 minutes early to the location to be safe. In the start queue, I was in the slowest group 😊 Anyone expected to finish past 4 hours starts last. It makes sense, as we will be the slower runners. However, with the 18000 runners, you heard that right 18K, it took some time for everyone to pass the start line. My gun time was around 9.30 AM. The weather was pretty nice and relatively cold. Therefore the waiting was a little painful. When I passed the start line, I already had a restroom visit in mind. That’s not good news 😃.

At 15km, I took a short restroom break for 3 minutes, including the restroom line. At every 5km, I monitored the length of the line and managed to skip till 15km. Remember, the longest I have run was 25km before the marathon. So the first 21km went smoothly. I had my headset on but did not play anything. I was enjoying the scenery and the other runners around me. I managed to keep my pace and heart rate pretty stable. At every water station, I took a small energy drink and one-third of a banana provided by the station crew. This was my first time eating and digesting while running. Thankfully nothing went sideways. I had only two gels with me, which was not enough for sure. Before the race, I did plan to rely on the stations to provide enough food. They did. Every 5km, I had my banana and energy drink, a small glass of water with vitamins.

At 28km, things started to feel a little weird. My right leg began giving IT-Band is coming signals. I started feeling sluggish and bored. My heart rate started increasing from 130 steady to 140s. This was too early. I opened up one of the gels and took it down. I started my podcast queue on my headset. I have switched to run-walk-run, walking 30 seconds every 1-2km as I felt the need. Those three changes got me back on track. IT-Band signals disappeared, and my energy was back. My heart rate rolled back to 130 on average as well. My average pace decreased from 6 minutes 40 seconds/km to 7 minutes/km. That was perfectly fine to stay under 5 hours for me. That’s how I finished the full 42km 🎉.

As you might know from previous blog posts, I do all of my cardio fasted in the morning. I knew that would not work with a 5 hours long running session. Even if it did, I would probably slow down too much. From previous experience, I know I can run much faster and with better energy when I’m in a well-fed state. I researched and decided to eat some relatively healthy additional carbs before the race day. That ended up being an excellent Italian pizza 🤣 . During the race day, I woke up 3 hours before the race and ate three carb bars full of oats and an entire banana. Each bar was about 100 cal with 2 grams of sugar only. Regarding eating during the race, you already know what happened in the previous section.

My plan went kind of well. I stayed injury-free and finished the marathon with a decent energy level. Reflecting back to my training days, I believe the fasted cardio limits my performance and has a risk of causing injury. Here is my thought process; when running, a combination of fat and carbs is used throughout the fat and carb metabolism. When one of the resources is depleted, such as carbs due to heavy dieting, the fat metabolism is not enough to sustain the same performance. Therefore, muscles get tired, and the runner loses form leading to injury. Of course, these are all my theories based on my limited experiences with my body. However, I have two decisions that I’m planning to pursue for now. If I’m running longer than 21k, I will eat before the run and have a gel with me, just in case. If I’m running a marathon or anything that exceeds that effort, I will eat as much as what covers my total effort with no negative caloric output expectations as a result of the event. 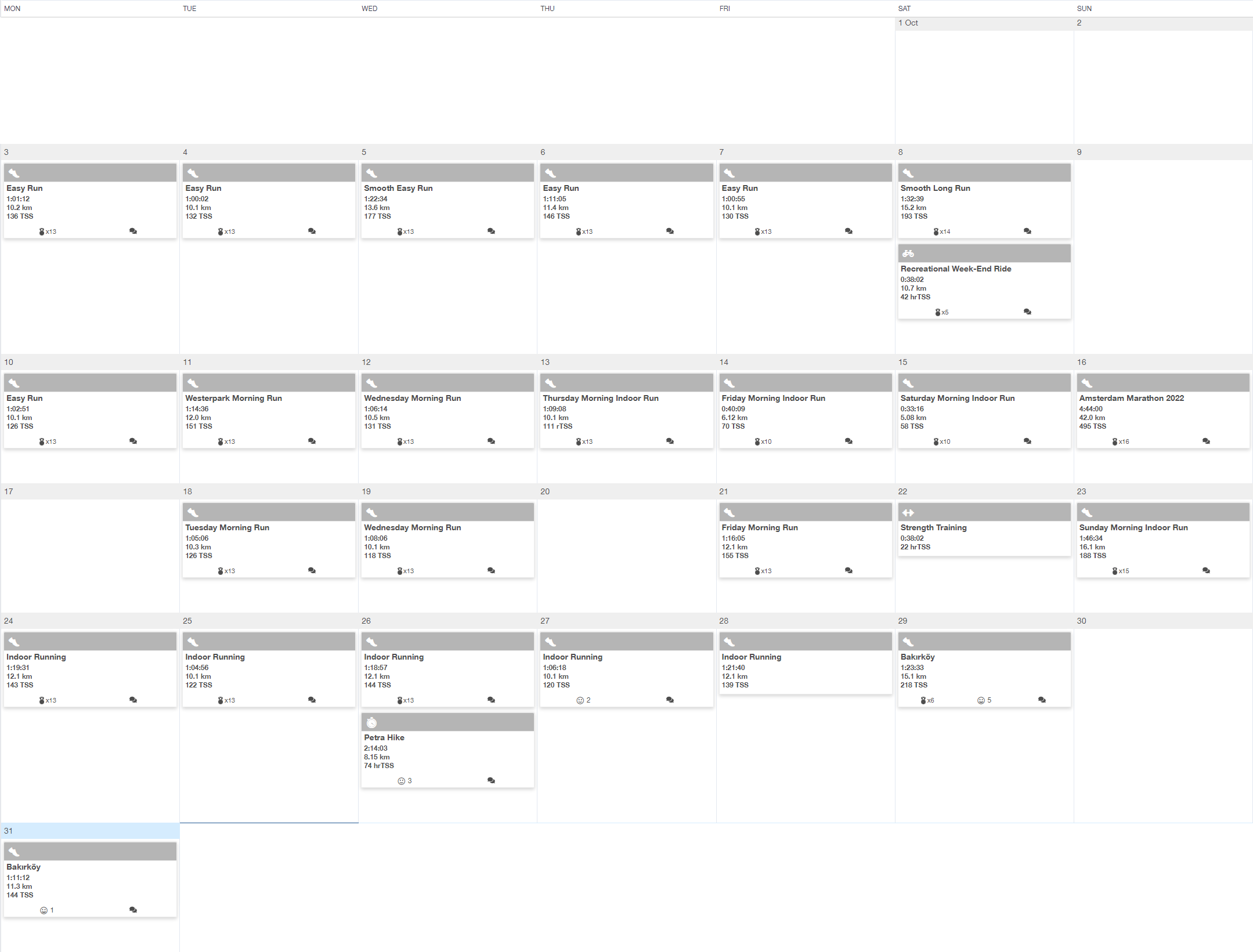 Starting at the beginning of September, I had two days off due to blood tests on the 3rd. Then I decided to run 10km daily with intermittent 13km and 15km to keep things changing. However, my weekly volume had to go down due to the upcoming marathon. Two days before the marathon, I drastically lowered the volume to 5km daily to keep things moving. After the marathon, I forced myself to take a day off. I really felt like I could run, but I intentionally forced myself to stay on track with my plan. Yes, sometimes “not running” is hard to do due to fear of losing performance or the chance of slowing down recovery. The next day, on the 18th, I started back with a 10km run. It went pretty nicely. Being able to run 10km two days after a marathon is pretty much a recovery success for a newbie like me. I believe that’s simply because I did not push my body during the marathon for a particular pace.

On the 20th, I had a 7 AM flight for a business trip. Instead of waking up at 2 AM to get my run done, I decided to skip the day and sleep for increased recovery. This is another moment I’m proud of myself for being able to flex things without letting them go haywire. Starting on the 22nd, I was in Jordan for another trip. Finding outdoor running locations was more challenging than I expected. Even though I’m not too fond of indoor running, I had to get things done. The first day I decided to use the advantage of having a gym, and I did some weight training. On other days kept swinging between 10km to 12km, finishing the week with a 15km run. Here is my surprise for you: I had already signed up for another marathon on the 6th of November, the Istanbul Marathon.

Between the Amsterdam and Istanbul Marathons, there are only three weeks. I initially thought that if Amsterdam wouldn’t work, I could give it another shot in Istanbul. Now that Amsterdam is a success, I’m more like, let’s see if Istanbul would also happen. So the three weeks I have are supposed to be recovery from Amsterdam and tapering for Istanbul. I have no goals at all for the Istanbul Marathon. If I can finish it, that would be amazing. If not, great! I would at least have run across the Bosphorus bridge 😂. I’m 100% sure that even if I can finish the Istanbul Marathon, my time should be much lower compared to Amsterdam due to the inclines across the course. 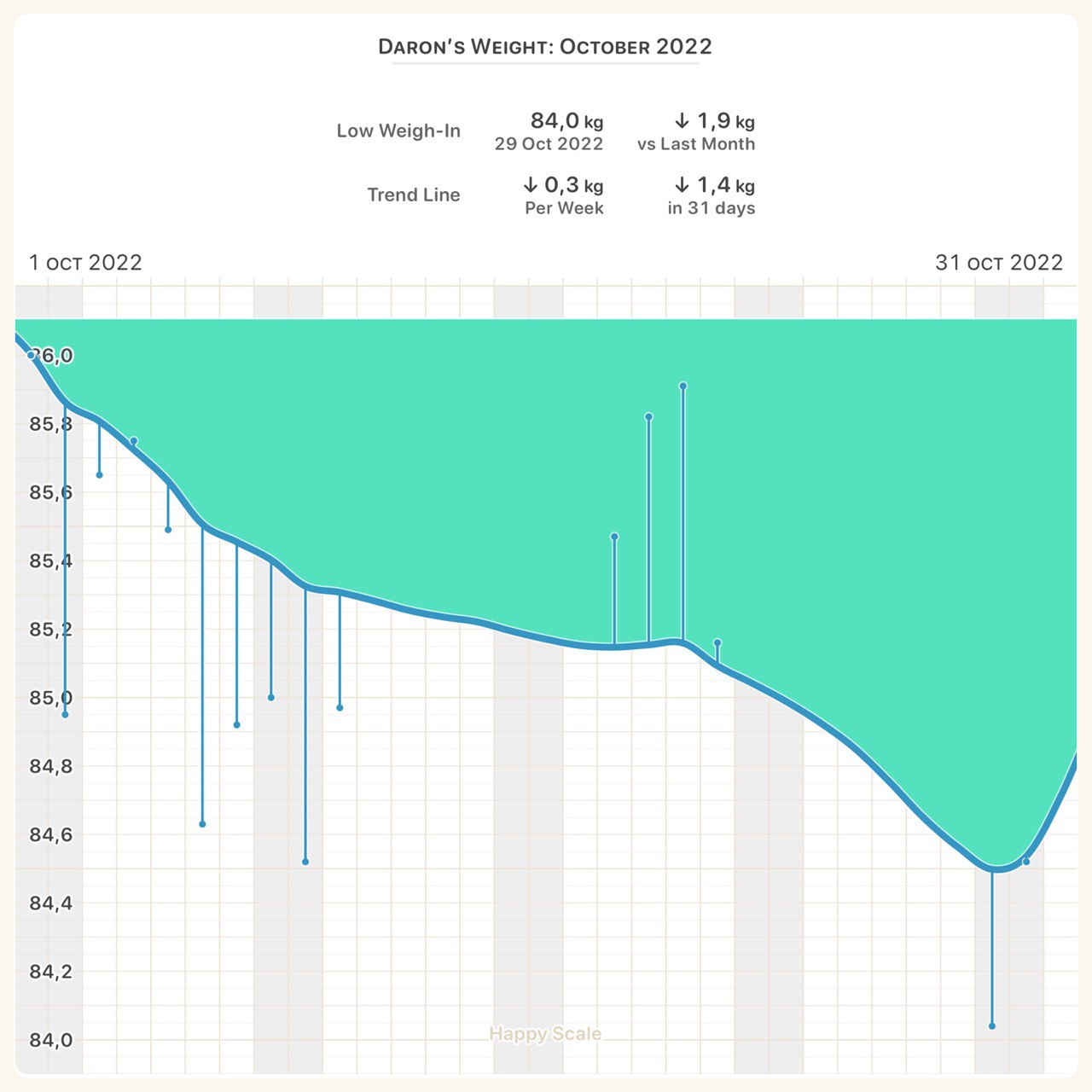 Weight management is now definitely on the bench. If you know a little about the food in Amsterdam and Jordan, I’m sure you know what I mean. I have continued my intermitted fasting plan except for pre-race and race days. However, considerations around overall calories taken are out the window, and the nutritional quality of food has been on the backpack. With less travel and better structure, I hope to get things back on track soon. Still, I lost 1.4 kg / 3 lbs on average, or we might call it a balanced month.

That’s it for October! See you next month!